How Lab-Grown Meat Can Help The Earth

How ‘lab-grown’ meat could help the planet and our health 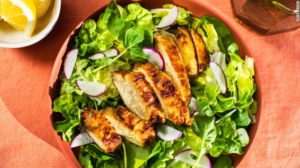 What if there was a way to eat meat without farming and killing animals that contributes to the climate crisis and risks high cholesterol levels?

Cultivated meat is real meat grown directly from animal cells. These products are not vegan, vegetarian or plant-based, but real meat, made without the animal.

The process of making cultivated meat is similar to brewing beer, but instead of growing yeast or microbes, it’s animal cells.

Scientists start by taking a small cell sample from livestock animals such as a cow or chicken, then identify cells that can multiply. From there, they put the cells in a clean and controlled environment and feed them with essential nutrients they need to replicate naturally.

Progressing from lab production to making products in commercial facilities, some companies are moving away from the term lab-grown meat. Instead, these companies refer to it as cultivated meat, cultured meat, cell-based or cell-grown meat, or non-slaughter meat.

The industry is about 10 years old, so cultivated meat is still a few years away from being commercially available to US consumers in grocery stores or restaurants — and maybe up to 20 years more for it to replace a substantial portion, or all, of the traditional meat industry. At this time, Singapore is the only country to have approved cell-based meat for consumer consumption.

Until then, cultivated meat and its potential benefits for animal, human and environmental health are more hope than promise.

Making cultivated meat is based on the field of tissue engineering — growing human tissues in a lab for medical repairs and regeneration.

Scientists get cell samples from animals by harvesting a tiny piece of tissue taken via biopsy, isolating cells from eggs or traditionally grown meat, or obtaining cells from cell banks. These banks already exist for purposes such as medication and vaccine development.

The second step is identifying nutrients such as vitamins, minerals and amino acids for the cells to consume. In the same way that a traditionally grown chicken has cells and gets nutrients from the soy and corn it’s fed, isolated cells can absorb the nutrients they’re fed in a lab or facility.

The cell sample takes roughly two weeks to grow into the desired size. Next is converting the meat into the finished product, whether that’s a chicken breast or nugget, or beef burger or steak.

Granted, making cultivated meat as similar to regular meat as possible is still a work in progress. However, this discrepancy could also be due to the fact that traditional meat’s flavor is influenced by myriad factors involved in the agricultural process.

Investigation Of Hepatitis Outbreak Could Link To Fresh Strawberries